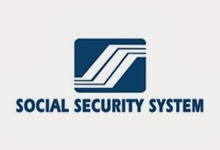 What is the death benefit?

It is a cash benefit either in monthly pension or lump sum paid to the beneficiaries of a deceased member.

Who are the beneficiaries of a deceased member?

What are the types of death benefits?

the monthly pension; and
the lump sum amount.
The monthly pension is granted only to the primary beneficiaries of a deceased member who had paid 36 monthly contributions before the semester of death.

The lump sum is the amount granted to the primary beneficiaries of a deceased member who had paid less than 36 monthly contributions before the semester of death. The secondary beneficiaries shall be entitled to a lump sum benefit.

How much is the monthly pension?

The monthly pension depends on the member’s paid contributions, including the credited yeas of service (CYS) and the number of dependent minor children but not to exceed five.

The amount of monthly pension will be the highest of:

If the deceased member is survived by legitimate, legitimated, or legally adopted and illegitimate children, how is the monthly pension divided?

In cases where there are no legitimate, legitimated, or legally adopted children, the illegitimate minor children shall be entitled to 100 percent of the basic pension.

How is the monthly pension paid?

The monthly pension is paid thru the beneficiary’s designated bank. The beneficiary is allowed to choose the bank nearest his residence thru which he wishes to receive his pension benefits under the “Mag-impok sa Bangko” program. This became mandatory effective September 1, 1993.

The beneficiary must open a single savings account and must submit to the SSS his saving account number and a photocopy of his passbook upon filing of application. The original passbook must be presented for authentication purposes.

Upon approval of the claim, the SSS will mail a notice voucher to the beneficiary informing him when to withdraw his benefit from the bank.

How much is the lump sum death benefit?

The primary beneficiaries of a deceased member who has paid less than 36 monthly contributions shall be entitled to lump sum benefit which shall be the higher of:

The secondary beneficiaries of the deceased member shall be entitled to a lump sum benefit equivalent to:
36 times the monthly pension; if the member has paid at least 36 monthly contributions prior to the semester of death; or

Survivorship pensioners under the effectivity of RA 7875 on March 4, 1995 and thereafter, are no longer covered. However, those who wish to avail of PhilHealth benefits may enroll in the Individually – Paying Program (for voluntary/self-employed) or the Indigent Program (IP) of PhilHealth.

If the deceased member has not paid any single contribution, are the beneficiaries still entitled to the death and funeral benefits?

The primary or secondary beneficiaries of a deceased employee-member, who had no contribution payment at all and who was reported for coverage shall be entitled to funeral benefit only.

Are the children of a deceased member entitled to the dependents’ pension?

The dependent legitimate, legitimated, legally adopted or illegitimate children, conceived on or before the date of death of a deceased will each receive a dependents’ pension equivalent to 10 percent of the members’ monthly pension or P250, whichever is higher.

Only five minor children, beginning from the youngest, are entitled to the dependents’ pension. No substitution is allowed.

Where there are more than five (5) legitimate and illegitimate minor children, the legitimate shall be preferred.

For how long will the dependent child receive his pension?

What is the funeral grant?

A funeral grant of P20,000 (effective September 1, 2000) is given to whoever pays the burial expenses of the deceased member or pensioner.

What are the documents needed in filing death and funeral claims?

Death claim application (SSS DDR-1)
Filers affidavit
DDR Savings Account Form
Passbook (for Pension)
Report of Death (if cause of death is work-connected)
SSS Form CLD 13A (Affidavit for Death Claim, if claimant is a secondary beneficiary)
SSS Form CLD 13 (Joint affidavit, if claimant is a legal heir)
Photo of filer and valid IDs
If married, marriage certificate of the deceased and birth certificates of minor children (duly certified by the Local Civil Registrar)
If single, the deceased member’s birth certificate and marriage certificate of the parents (duly certified by the Local Civil Registrar)
Note: Other papers may be required as they are found to be necessary during the processing of the claim.

Claim for Funeral Benefit (SSS Form BPN-103)
Death certificate duly certified by the local Civil Registrar
Receipt of payment issued by the funeral parlor
Affidavit of funeral expenses
Report of Death (if cause of death is work-connected)
Photo of filer and valid IDs
Original or certified true copies of the supporting documents should be presented during the filing of the claim.

Where does the beneficiary file for the funeral or death benefit?

Application forms for funeral/death benefit can be filed at any SSS branch or representative office.

This information is copied directly from the SSS or Social Security System documents and posted here just to share the information to those who are asking me for this. You need to visit the official website of SSS at www.sss.gov.ph for more official information or visit the the nearest SSS office for any official transactions.


The Philippine Social Security System (SSS) has released a table of its schedule of contribution that will take effect on January 2014.

Monthly Social Security System (SSS) contributions of at least 30.04 million individual members and 871,642 employers rise to 11 percent from 10.4 percent effective January 2014, the SSS said as it posted the new contribution schedule on its website.
The 0.6 percent increase translates to a total contribution of P285 for an employee whose monthly compensation is from P2,250 to P2,749. Employee's share in the P285 is P90.80 while the employer chips in P194.20. Domestic helpers' minimum monthly wage in Metro Manila is P2,500.
According to the new contribution schedule, a slightly lower rate applies for the self-employed, voluntary members and members who are overseas Filipino workers.
The minimum wage rate in Metro Manila is P429 per day, which amounts to P8,580.00 for 20 working days in a month. The SSS contribution rate at this wage level is P945.00, of which P308 is the employee's share while the employer's share is P636.20.
For private sector employees who earn more than P15,750 per month in compensation income, the total contribution is P1,790, for the employee's share of P581.30 and employer's share of P1,208.70. 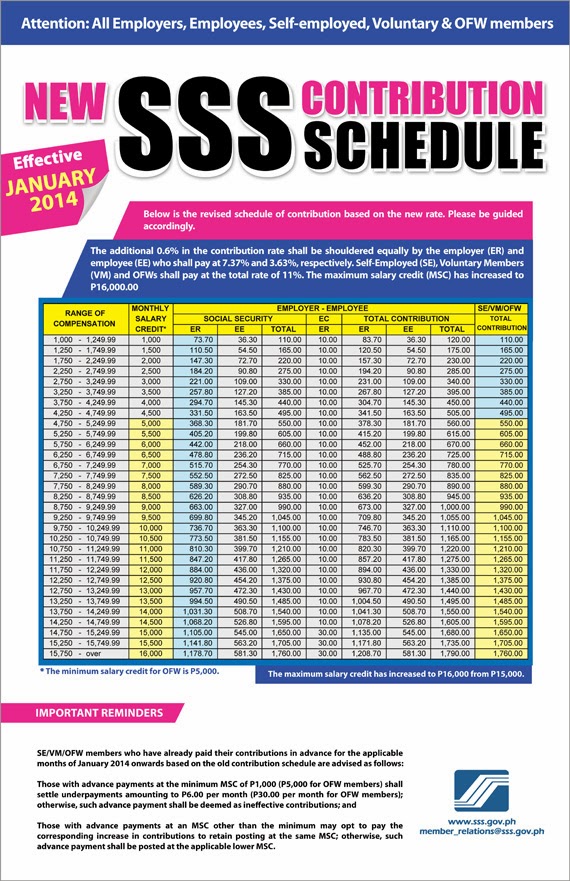